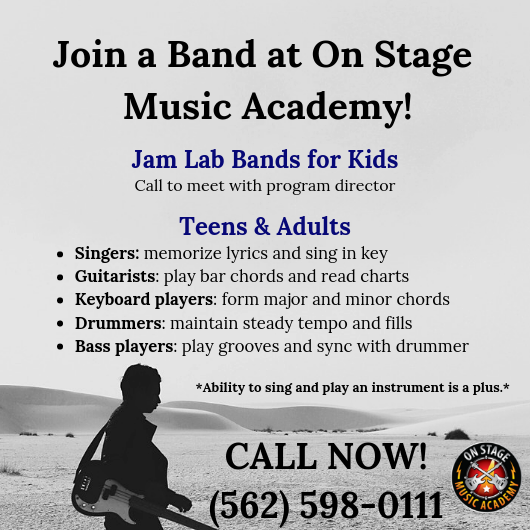 Bands are a great way for people become music friends and spend time together! We have bands for all ages and all levels, and each band is customized to the members‘ goals and abilities.

Bands and Vocal Groups are the most fun.  They put to practice what you’ve learned in your private lessons, you will enjoy making music as part of a group. Playing in a band improves musicianship and teaches you how to support other musicians while you are all playing your favorite tunes, or learning new music. You will play both as a soloist and as a supporter, which are very different roles in a band.

Our Bands and Groups

This band was founded to play more advanced and challenging rock and pop. The band consists of vocals, guitars, drums, bass, and keyboards. Beyond our Showcases performances, Damage Control also play sets out in the community, performing at the St. Joseph’s Fair and other locations in Long Beach. The band plays a wide range of music from Eagles to Rush, Joe Walsh to Santana.

Originally this was a Laboratory Band, teaching students how to be in a band and focus on a variety of pop songs. The band holds a leading singer, and guitar and drums players. They played music from Train to Aretha Franklin, and more.

Our Adult Rock Band has evolved through many members. While rocking their interests and abilities, and having the same amount of fun, the band is improving musical skills together. Led by coach Everett, the band has a strong focus on voice work.  In the bands, you will find vocals, guitars, bass, and keyboards, with occasional guest appearances from our trumpet and woodwinds students. They play many artists such as Fleetwood Mac songs, and others.