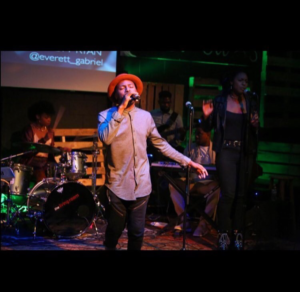 Everett began singing at an early age, and piano lessons at the age of seven. He is affiliated with ASCAP, the M.I.A (Musicians in Action) as well as A.M.T.C (Actors, Models & Talent). He graduated with a degree in Music Performance/Business. Everett works mainly out of L.A doing live performances and session work. He also writes for various artists under his songwriting team “10derBlack Music”, and releases under his own production company Discovery Ent Group.

His sound is shaped by the early greats such as Barbra Streisand, Donny Hathaway, Stevie Wonder and Whitney Houston, tied together with the modern influences of Beyoncé, Frank Ocean, Matt Corby and Jhene Aiko. His self-described sound is “Tribal Pop/ Folk Soul.”

You can find his recorded work on any major platform: iTunes, VEVO, Spotify and more