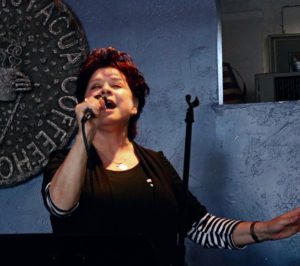 Celeste Tavera is a versatile performer from Classical, Jazz, Broadway, and Pop music. She has also performed and recorded Their Thought & Back Again at the Globe Theater, as well as Ivory Joe Cole. Other Broadway credits include West Side Story with the Michigan Opera Theater, and the world premiere of Musical Revue, Cole & Will (together again).

Her recording credits include Musical Promotion for the Academy Awards, background vocals for Disney soundtrack “Land Before Time”. She has recordings with Yamaha Pianosoft Plus Audio, such as Celeste Tavera in Recital, Best Loved Arias, and You Keep Me Singing.

Ms. Tavera is the recipient of several prestigious awards, including the National Winner of the Metropolitan Opera in New York, the Golden Eagle award for Most Promising Performer, the Victor Fuchs award, and the People’s Choice award. She has sung in concert with Jose Carreras in Vincenza, Bologna, and Catania, Italy. She performed in many operas, including two National tours across the United States with New York City Opera and San Francisco Opera Theater. She performs concerts with orchestras and Jazz Bands.

Celeste joined Westmont College in the fall of 2000 as a vocal professor for the music department. She teaches at various Music Schools and Academies in Southern California. She offers her students a lasting vocal technique that can help them through many vocal challenges in their careers. Many of her students have gone on to successfully perform in concerts in the U.S and Europe, also performing in musical theater, operas, and vocal competitions. She also prepares students for college entrance auditions and scholarships in voice and piano. she has created and directed performances for musical theater, opera, and karaoke.