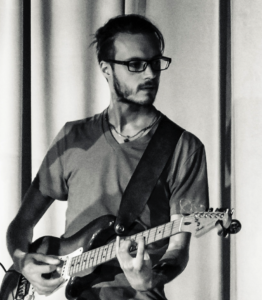 Alexey Kozlov has worked as a guitarist and producer with Russian pop acts since 2008.

After LACM he performed with different artists around Los Angeles area, working as a session musician, producer, and a performing artist.

In 2016 Alexey completed his Master's degree program at Cornell School of Contemporary Music in Los Angeles. He studied under great teachers such as Abraham Laboriel, Allen Hinds, Otmaro Ruiz, Mauricio Guerrero, Michael Bradford and others. At the same time, he was involved in different projects as a performing artist, arranger, and producer.

As a guitar teacher at On Stage Music Academy, Alexey shares his experience with his students through teaching music theory and instrumental techniques for live and studio performance.